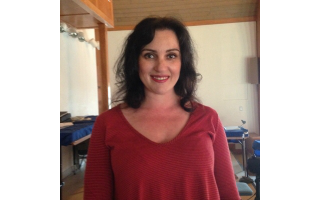 Alisa Kipnis is an organist, a pianist, a choral conductor, and is a member of the American Guild of Organists.

After moving to the United States in 2000, Ms. Kipnis received her Second Bachelor Degree in Organ performance at Towson University, and Master of Music Degree at Peabody Conservatory of John’s Hopkins University.  Her principal organ professors have been Henry Lowe and Donald Sutherland.

During her career, Ms. Kipnis has served as Music Director in Russian Orthodox and Episcopal churches.  However, her interest has not been limited to the classical and sacred music fields. Being raised in a multicultural country, Alisa has pursued knowledge and experience in the areas of folk and popular music also.

In performances Ms. Kipnis has appeared throughout Russia, France, Poland and Ukraine with numerous choral groups.  She also performs as a solo organist. We are pleased and proud to have Ms. Kipnis as a part of our staff.